After a season’s hiatus, I’m now back in the game and all the data since that final game of the regular 2014/5 season is now loaded and available on the site.

Until the new season kicks off, all of the ‘Current Season’ stats will hold data for 2015/6, with the exception of the Assists data which are due to follow in the coming weeks.

I’m going to try to be more realistic about speed of updates this year – aiming to keep the site data updated within a day or so of each game, but with articles perhaps only once every 3-4 weeks, but when they come they’ll be in more depth. Little snippets of stats, sometimes in-game, will trickle through on twitter @borobrain once again. Do follow along.

If you subscribe to the fixture calendar, you’ll note that this has now been updated for the coming season, and the results will continue to be maintained.

Some four months have passed since we last did this. The previous survey was conducted 10 league games into the season, when Boro’ stood in 20th position in the league with nine points earned, but off the back of a significant amount of change. Since then mixed fortunes had brought a decent run of form checked by a seriously bad one, and a lack of significant progress in any of the cup competitions. Now placed 19th in the league, Boro’ have as many points earned as games played (28), but are threatened by the games in hand held by the sides below.

So, how does that translate to the mood of the supporters? Once again in this survey, Boro’ fans were asked the same four questions as usual – to rate how satisfied they were in regards to the players, the manager (split between on and off the pitch) and the club itself. Again, they were also asked roughly how many games they had attended, to see whether anything more could be inferred from that characteristic. END_OF_DOCUMENT_TOKEN_TO_BE_REPLACED

Well, you all know how this is going to go, don’t you? Or do you? Let’s find out!

The last Boro’ Satisfaction Index was conducted in April 2015, just as Boro’ were on the verge of securing a playoff place, and a viable opportunity at promotion for the fourth season out of the last six (the only exceptions being the second and third seasons in League One). This poll was conducted as Boro’ had completed ten games of its latest League Two season, and made a significant change in its direction, having parted ways with manager Graham Westley and his team and handed responsibilities to Teddy Sheringham. Along with that, a significant proportion of the previous playing staff departed, and new players recruited (or promoted from youth squads).

In this survey fans were asked the same four questions as before – how satisfied they were in regards to the players, the manager (split between on and off the pitch) and the club itself. This time a further question was also introduced to see whether there are any material splits in sentiment according to how many games fans attended, as a possible proxy for devotion. END_OF_DOCUMENT_TOKEN_TO_BE_REPLACED

In order to attend to family matters I don’t expect to have much time to devote to the site for the remainder of 2015. Rather than have a half-baked attempt to keep it up-to-date, I’ve put a temporary halt to the stat updates and twitter feed and will aim to pick those up again in early 2016.

The BSI will continue, however, with two or three surveys planned between now and the end of the year, and there May be occasional blog posts, but the site stats are presently frozen since the end of the regular 2014/5 season.

Thanks to everyone who took part in the latest Satisfaction Index poll. There was a decent increase in the number of contributions this time around, and maintaining that is vital to the credibility of the data, so please do keep taking part when you can.

When we last conducted the BSI survey, Boro’ had just made a surge towards the playoffs, before stuttering slightly with consecutive losses to leave them 8th in the table. Since then Boro’ have crammed in 16 league games, with an excellent record (W7, D7, L2, F22, A15, Pts28) and putting themselves on the brink of a playoff place, subsequently confirmed after the poll was closed.

I wrote last time that the mood of the fanbase mirrored Boro’s fortunes, and that the typical fan appeared to be positive in every aspect monitored. The headline this time around is simply “more of the same” – average scores across every metric rose again, with huge increases in the numbers of “extremely satisfied” responses… END_OF_DOCUMENT_TOKEN_TO_BE_REPLACED

With Bury and Southend having finally faced off again, every side in League 2 (and, more importantly, at the top end of the table) has two games remaining in its season.  I wanted to put together a post to collect all the various scenarios and discussion points that could affect how the final stages of the season play out. Consider this your one-stop shop for “what if?”s.

Automatic Promotion
Burton’s promotion is secured and Shrewsbury’s goal difference is so comfortable that they really need only one point to ensure their future in League One to avoid being caught by both Wycombe and Southend, who would both need to win both their games and hope that the Shrews lose both.

Race for the Playoffs
Of the sides hoping to make a late surge for a spot among the top seven, there are still four outside them who remain in the hunt: Exeter, Northampton, Newport and Luton. The first three all need to outdo both Luton and Plymouth by a significant margin, whilst Luton require either more points than the Pilgrims or to hope that Boro’ fail to get all three points against Carlisle and also secure a home victory on the final day.

Playoff Picture
If Boro’ do qualify for the playoffs, it’ll be as a result of finishing 6th or 7th, and result in a matchup against either Wycombe, Bury or Southend (or Shrewsbury at a push), with the home leg first.

Should Boro’ lose both of their games, only the Hatters and Plymouth could leapfrog them, and even then it would require both of the chasing sides to claim at least four points.

Even if Boro’ were to claim a single point from the six on offer only a pair of wins from both Plymouth and Luton would fail to secure the playoff berth, still with a game remaining. For that to become a reality, the Boro’ draw would need to come this Saturday versus Carlisle.

The full shake-up will almost certainly only be revealed come the final day. The only way Boro’ could have their playoff opponent fully confirmed come Saturday night would be if they earned at least as many points as both Plymouth and Luton, whilst Bury lost and both Southend and Wycombe won. The odds for a five-fold of that nature come in at around 60/1, so we can probably rule it out.

Could Goal Difference Matter?
In all likelihood, no. For goal difference to come into play to determine whether Boro’ make the playoffs or not, they’d need to lose both games and for at least one of either Plymouth or Luton to take exactly four points whilst the other gets a minimum of four. The other scenario that could see Boro’ level on points would have them drawing both games and both Plymouth and Luton winning both of theirs, but given the final day fixtures this is a logical impossibility.

Here’s your quick-reference guide to what the outcomes of three key games will mean for Boro’s fortunes: 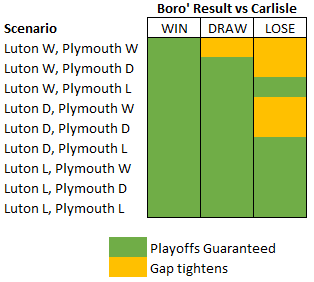 The green scenarios ensure Boro’ make the playoffs. The yellow ones take matters to the final day, where their fate would still be in their hands. Even still, the probability that this happens is still just under 10% (going by current odds). I’m trialling some methods using ELO scoring to determine probabilities of long-term outcomes, which I may roll out in a series of posts next season, but haven’t quite nailed down the best way to present it yet.