If you’ve already taken in the first part of our survey results breakdown, you may or may not be keen to hear more. I’m guessing if you’re still reading this you’re not averse to the idea.

We’ve already seen that you generally expect Boro’ to finish somewhere around upper mid-table (give or take), and are cautiously optimistic about the upcoming season. However, what some supporters would be willing to compromise on in order to achieve success can vary greatly. The survey asked fans whether they would be willing to forego cup success for a top seven finish and, conversely, whether they’d sacrifice a playoff spot for a big cup run. Here are the results: 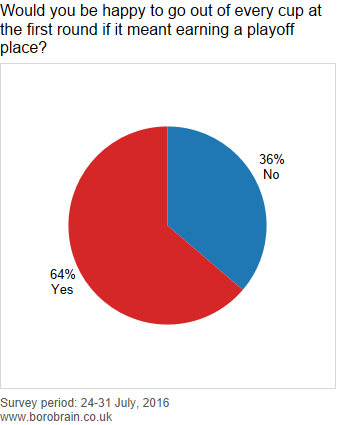 Almost two-thirds of fans polled would take a playoff place at the expense of progress in any cup competition – whilst not a complete whitewash, that’s a pretty firm preference for league over cup, although this deliberately wasn’t a strict either/or question.

Meanwhile, a similar number also stated that a place in the 4th round of the FA Cup wouldn’t be enough to sacrifice a spot among the top seven come May next year: 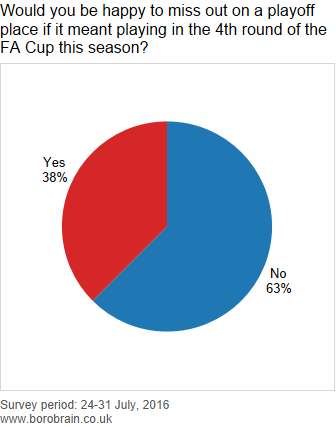 What’s important to underline here is that these aren’t the same fans answering “yes” to the first question but “no” to the second – in fact fewer than half of the responses formed that pattern. Some 16% of fans polled answered “no” to both, hinting that they were thirsty for progress on both fronts. Meanwhile, 18% of respondents answered “yes” to both questions, suggesting that there is a healthy portion who would take some success in whatever form it came.

The next charts almost don’t require printing, so emphatic as the results are that they could probably be explained in a few lines of text. Two questions asked fans which they felt were Boro’s strongest and weakest areas, able to choose between the three options “Goalkeeper and Defence”, “Midfield” and “Attack”. 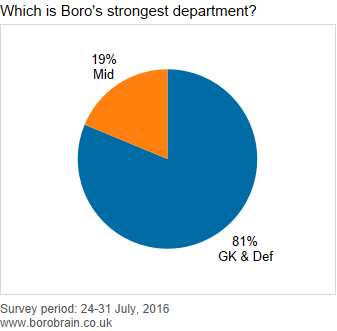 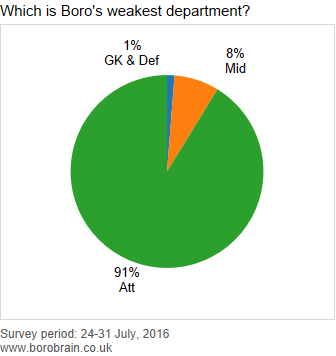 Suffice to say there is some consistent opinion out there in regard to this, although it will be interesting in retrospect to compare this with other seasons – with most teams aching for a killer forward line, few teams’ fans will feel totally satisfied with their attacking options, so perhaps to some extent this is to be expected. What isn’t necessarily expected, though, is the strength of feeling towards the rearguard, which is certainly impressive.

Finally, to close us out, some further inspection of the sides you felt are most likely to finish above or below Boro’. We’ve covered off who you expect to top the table, but given the choice to name as many as three sides to rack up more points, here were your suggestions:

Two-thirds seem convinced that Portsmouth will be up there, and half named Plymouth. One in four went for Luton and one in five named Leyton Orient among the most likely to finish higher.

Meanwhile, those you felt were more likely to be at the bottom come the end of season appear below:

Luton sneak in at the bottom, perhaps hinting at our first possibility of fan rivalry influencing opinions, considering that they were named the side fourth most likely to finish above Boro’!

That brings us to the end of the headline results from this survey. If I find the opportunity I may dig a little deeper into one or two features at a later date, but for now thanks again to everyone who participated. I envisage running a similar exercise in future seasons.