In late July, as Boro’ played out their final friendly matches ahead of the new season, I polled fans on how they saw the upcoming season playing out – our first preseason survey. They offered their opinions on where Boro’ would finish, who would win the league, and which other teams would finish above or below them. The survey also delved into their mood and attitudes as the season gets underway, and the initial results are released here, in the first of two parts.

In part two, later this week, we will look into attitudes and the sides most likely to finish above or below Boro’, but in this first part we look at some of the headline results.

To open up, it helps to understand who responded to the poll. What’s clear is that respondents to this survey are not representative of the Boro’ fan base as a whole – those who are more engaged are more likely to have even noticed the poll on social media, let alone participated. Three-quarters of responses came from fans who’ve followed Boro’ for at least ten years, but even still these should give us some fascinating insights whilst being conscious of the heavy weighting towards the long-haul fan.

(tip: click the graphic to view a larger version)

Respondents were also asked how many games they expected to attend in the coming season, split between home and away. This is by no means definitive – circumstances change and levels of interest will naturally go up and down according to the team’s performance. However, it does give us a proxy for how invested the fans are, and when we come around to the second part of this analysis, can see how much of a factor this is.

As the chart above describes, just over half of respondents expect to attend at least three-quarters of the games, and a quarter of them plan to be at every home league game. Away game attendance is, as one might predict, somewhat different. 14% of respondents don’t intend to attend a single away game, with the rest split between a few and around half of games (only a few committed stragglers anticipate more than that):

Okay, so with that under our belts, what did you all have to say? Well, let’s begin at the top and work our way down – who do Boro’ fans expect to win League Two this season? 75% of responses put forward the same three names, suggesting that the field contesting the top spot is not exactly wide open this year – Boro’ fans are backing either Portsmouth, Doncaster or Plymouth for the title, with one in ten rating their Bedfordshire neighbours for a tilt. The first two are perhaps not a surprise, but Plymouth are rated only 6th favourite by the bookies ahead of opening day.

You may notice a sprinkling of exceptionally confident Boro’ fans also adding their name into the mix. 5% of respondents appear confident that Boro’ will secure automatic promotion this season, and a huge 77% predict a top-half finish, seriously belying the current odds offered of 9/4 against that outcome.

Closing out the first part of our analysis, the survey asked participants to “sum up your mood in a few words as Boro’ head into the new season” – the following word cloud demonstrates the most commonly used words. Here, the larger and redder the word, the more responses that used it (note, only those with at least two occurrences appear which does indeed include “meh”). 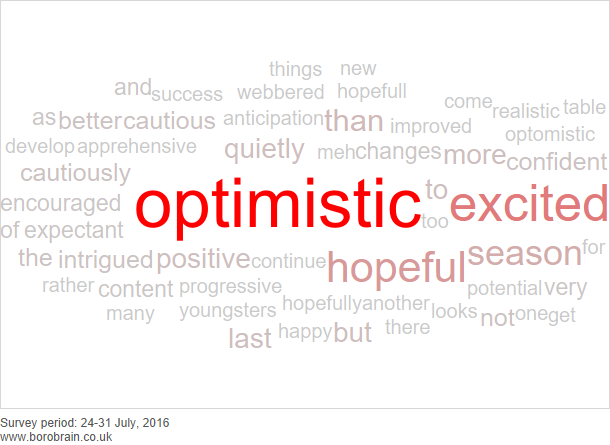 Just a shade over half of you described your mood as “optimistic”, allowing for various spellings, with “excited” and “hopeful” checking in as the next most popular terms. There are plenty of positive words among those and very little caution applied. All in all, things would appear to be on the up for Boro’ fans’ fortunes.

Part 2 of the results will look at answers to the following questions:

Those results should be published later this week. Thanks so much to all who took part, I hope you find the initial findings interesting.

Poll Summary Details:
Poll was conducted between 24th-31st July, 2016
Number of respondents was 80