Thanks to everyone who took part in the latest Satisfaction Index poll. We saw a bit of a dip in the number of participants this month – keeping the number of contributions high is vital to the credibility of the data, so please do keep taking part when you can.

Since the last survey in early December, Boro made something of a surge towards the playoffs, hitting the top of the form table before stuttering slightly with consecutive losses. There were eight league games in the spell (W5, D1, L2, F12, A8, Pts16) resulting in a leap up the league table from 15th to 8th.

Boro’s upturn in fortunes was mirrored in the mood of the fanbase – satisfaction with the players and manager ballooned so much that the typical fan currently appears to be positive in every aspect monitored.

Last time around we observed some subtle but overall insignificant change, whereas here we can see just how much the average satisfaction level has grown. The green line denoting averages for this survey appears fully outside to demonstrate the leap quite nicely, bringing what were the three struggling factors into line with feelings towards the club overall: 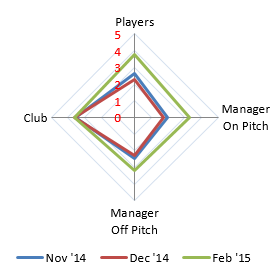 So, let’s see how the responses stack up for each question, beginning with fans’ feelings towards the players. Where previously there was quite a heavy skew towards the left hand side of the chart, now we see a fanbase almost devoid of dissatisfaction, yet not quite ecstatic to the point of stretching to extreme satisfaction. This would hint at least towards some nervous optimism: 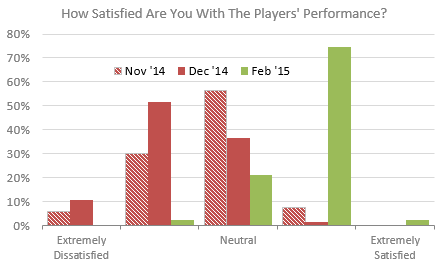 Some three-quarters of the fans polled returned a positive response – the highest such score across the four questions in any of our three polls to date.

Whilst not to the same degree, the same shift in mood applies to the fans’ feelings towards Graham Westley – both on and off the field previous polls found a fanbase sitting firmly on the dissatisfied side of the fence, whereas now there’s a definite shift towards the positive, but demonstrated in quite different ways. Here are both of the charts for the two managerial questions posed: 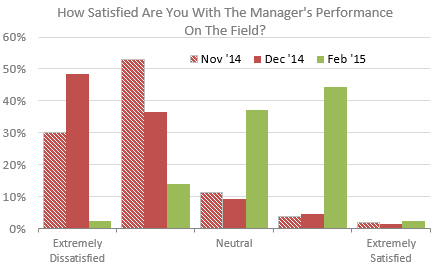 The chart for the manager on the pitch would appear to correspond closely to the shift recorded for the players, with the exception that there was more ground to cover. In the last two polls over 80% of responses returned negative opinions on the manager’s performance with respect to things he can influence on the pitch, but that number has now dwindled below 20%, whilst almost half of all respondants registered positive answers. 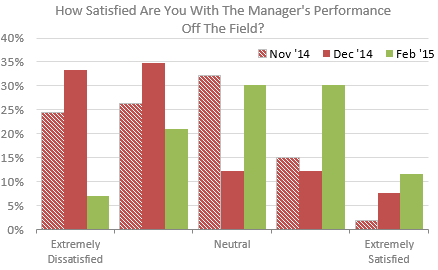 The equivalent chart for off the field tells a very different story, however, where there remains a positive shift but the spread of responses was, and still remains, quite split. More of those surveyed feel extremely satisfied than for any of the other three areas covered by the poll, yet almost a third still returned negative sentiments. This suggests, to me at least, that whilst a good portion of fans already saw Westley in a positive light (1 in 5 at the last count), those previously taking a negative view are somewhat more sluggish to change their views.

Remarkably, the view of the club remains almost totally unchanged over the course of four months and three polls: 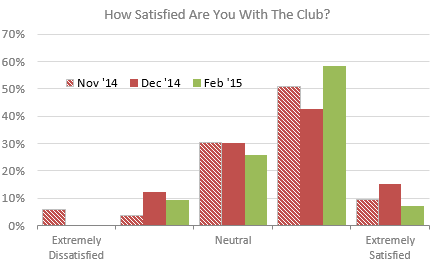 At the last poll I noted that a small handful of fans responded in negative terms to all four questions – this time around there was not one response of that nature. For the first time, however, there are some who responded positively across the board, some 23% in fact.

For the first time I’ve also captured a picture of net statisfaction – that is, the extent to which the positive clan drowns out the negative clan. This is calculated simply by removing the neutral voices and then subtracting the percentage of negative responses from the percentage of positive responses. This helps us to see how the shifts in each question compare – once we have more data points after the next survey, I will probably depict this in a line graph, but for the time being this tells a decent story. 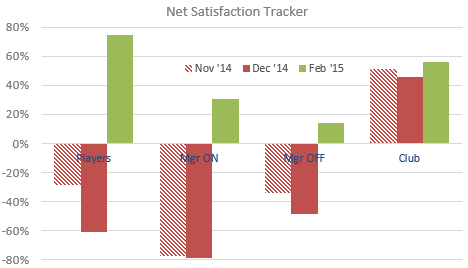 Because we’re subtracting one number from another, sometimes that will lead to a negative value where the negative responses outweigh the positive, but for now at least there’s a rosier view from the collective fanbase.

Thanks again to everyone who contributed this month. At the end of the season I’m planning a more comprehensive survey – if there are any areas you’d like to see covered here, please do get in touch!

Polling Method
Each question asked for a response on a 1-5 scale, where 1 represented “extremely dissatisfied” and 5 “extremely satisfied”. The intervening points were deliberately not labelled, but on an odd-numbered Likert scale we can assume responses of 2 to be leaning towards dissatisfied, 3s to be neutral and 4s to be leaning towards satisfied.
Respondent anonymity was preserved throughout, and every effort was made to prevent misuse by mandating a Google Account in order to take part, which could only be used once each time.

The next poll is planned for March 2015.