Thanks to everyone who took part in this month’s Satisfaction Index poll. There was a decent increase in the number of participants and if we can continue with these sorts of numbers then the outputs should remain pretty credible.

Since the last survey, Boro’s season continued along its somewhat jaunty path, putting five goals past Cheltenham in between the two FA Cup games against Maidstone, which ultimately saw Boro’ dumped out in a replay. There were four league games (W1, D1, L2, F6, A5, Pts4) resulting in a small climb up the league table from 16th to 15th.

At a high-level there was little change in the mood of the fanbase, with some subtle exceptions. The satisfaction level with the players notably declined, whilst there was a change in feeling towards the manager but not as harsh a negative slide. The following chart demonstrates how the changes in average satisfaction level compared by question: 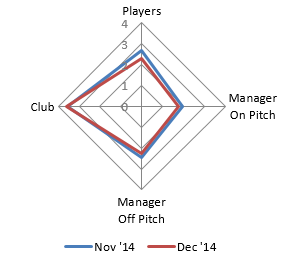 Comparison of mean average responses between first and second poll.

The red line appearing inside the blue line almost the entire way around captures the overall drop in satisfaction and, in particular, what previous tolerance existed for the players has been eroded pretty sharply, whilst little change has been felt towards the club. Here’s the chart of responses to the first question from this month, pitched up against the previous poll:

As we can see, the cause of the huge drop in average score (down 0.4) is the sheer number of responses that were previously neutral now responding negatively. Where previously 64% were either neutral or positive towards the players’ contributions, almost half of those now put themselves in the negative camp, with that figure dropping to 38%.

In respect of the two manager-focused questions, there has been a small downward trend, but not a significant one. The average score in each case fell by around 0.2 points, yet the proportion of positive responses actually marginally increased. What we see for the question focused upon match-specific activities is a downturn in the sentiment of those who were already on the negative side, with around one in six of those respondents who were slightly negative now at the extremely. 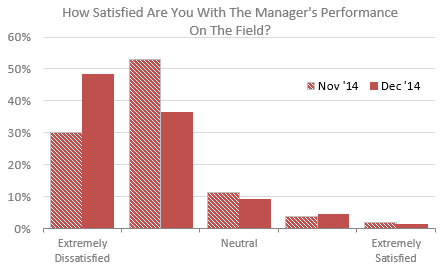 There’s a more curious change in response to the manager’s activities off the field, as a surge in those feeling negative is countered by a significant increase in those extremely satisfied. This would appear to represent a polarisation in the fanbase where some two-thirds of those previously recording neutral feelings fell to one side of the fence or the other. 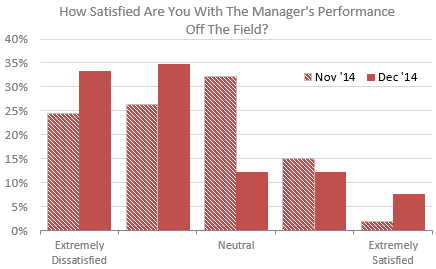 There was very little change of significance regarding sentiment towards the club overall, but a couple of small changes do stand out representing a small positive skew: not a single respondent recorded an extremely negative satisfaction with the club, whilst the proportion responding extremely positive grew to 15%. 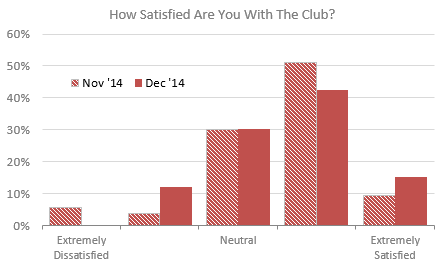 A quick note regarding the responses so far – in spite of quite consistent profiles in the two sets of answers, there doesn’t yet appear to be strong correlations between many of the questions, and no ‘typical’ profile of a Boro’ fan – where the set of respondents scoring negative for one question is considered, there remains a spread of responses to the other questions. The only exception to that appears, so far, to be in the case of the two manager questions, where there does appear to be a very strong correlation between the two (for those statistically minded out there, the coefficient is 0.7).

After the next poll I’ll introduce some tracking charts, but with only two observations so far they’re superfluous at this stage.

Polling Method
Each question asked for a response on a 1-5 scale, where 1 represented “extremely dissatisfied” and 5 “extremely satisfied”. The intervening points were deliberately not labelled, but on an odd-numbered Likert scale we can assume responses of 2 to be leaning towards dissatisfied, 3s to be neutral and 4s to be leaning towards satisfied.
Respondent anonymity was preserved throughout, and every effort was made to prevent misuse by mandating a Google Account in order to take part, which could only be used once each time.

The next poll is planned for February 2015.