I don’t intend to do a write up on many players departing the Lamex Stadium, but there was always something curious about Lucas Akins that added an air of mystery to his time at Boro’. Now that he has made his way to Burton Albion, it seems appropriate to pick apart what time he did spend with Boro’ – having featured in two seasons with games split almost equally between Gary Smith and Graham Westley makes for some nice comparisons.

Akins featured in a Boro’ shirt 88 times in total, appearing 42 times each for Smith and Westley, twice for Mark Roberts and was an unused substitute on two further occasions, both also under Westley. He scored 15 goals in total, five of which were penalties, never scoring more than once in a game but seeing Boro’ win on 13 occasions during that time, losing twice.

Ten of Akins’ goals came under Smith’s management, five under Westley, in spite of featuring almost as much under each gaffer (he played an average of 77 minutes and 75 minutes respectively). The chart below shows how many minutes he played during each game and at which point he scored goals. The coloured bars represent different managerial reigns. 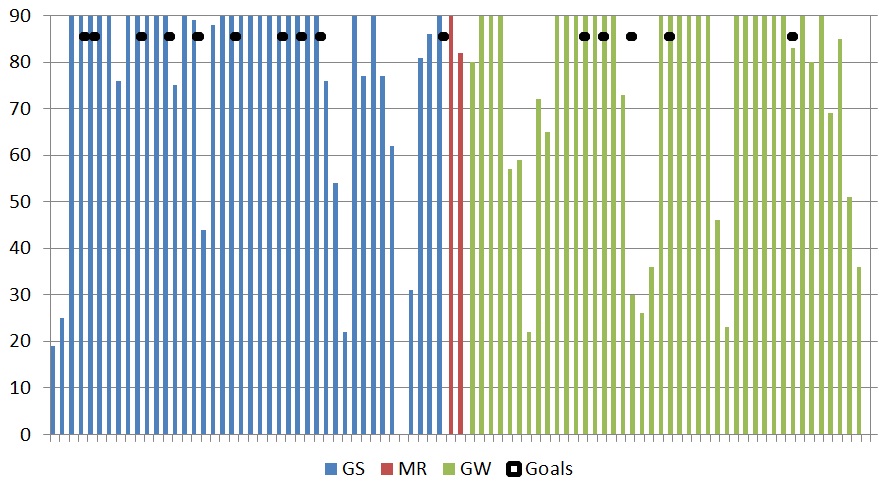 Though Akins’ goalscoring contribution came in greater volume during Smith’s tenure, his typical position on the pitch was also different – often playing in a striking role for Smith he was usually more withdrawn under Westley, allowing him to contribute less frequently in goalscoring areas. Additionally, it’s worthwhile factoring in that he was playing in a team that lost more often (55% of the time) under Westley (compared with 48% of the time under Smith).

Akins showed promise in patches throughout his time in red and white, contributing well throughout 2012/13 without standing out and then being called upon in spells of six or seven complete games the following season without getting a longer run. His points-per-game contribution varied little over the course of his time here, however – in 2012/13 it was 1.16, rising to 1.20 in the following season. Under Smith it was 1.24 whilst under Westley it was 1.15. These differences are so slim as to be negligible.

If anything, perhaps Lucas Akins resembled the last two seasons quite typically – whilst he didn’t stand out for being particularly good or particularly bad, being average in a team that isn’t doing very well doesn’t exactly sit on one’s CV so well. For Lucas’ benefit, let’s hope that a new beginning allows him to break out a little.